Elise is originally from Sweden and has been living in Yorkshire since 1997. During her 20- year career working in well-known hospitality establishments in Leeds, she studied holistic therapies such as Swedish body massage, Reflexology and Indian head massage, which sparked an interest in human anatomy and the understanding of the body’s ability to self-heal and self-regulate. While having 2 young children Elise suffered with injuries herself and was introduced to Osteopathy. She graduated from the College of Osteopat 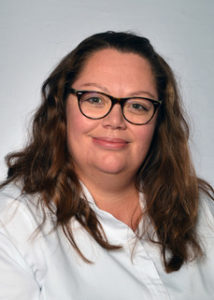 hs in July 2020, with a Bachelor of Osteopathy (BOst) with Honours.

Elise believes most people can benefit from osteopathy. She enjoys getting to know and understanding each individual and their ways of living to help each patient restore a healthy balance in their body and their day-to-day life. She is fascinated by the pelvis and how a dysfunction can cause issues elsewhere in the body. She is therefore particularly interested in working with women during pregnancy. She regularly attends courses and CPD events to further her knowledge especially in this area. She has also a keen interest in ribcage dysfunctions and how it can affect the breathing mechanics in patients suffering with lung pathology.

Being Swedish, Elise enjoys spending time outdoors, especially by the sea, but she also adores the English countryside. She loves cooking, baking and spending time with her family. She spends a lot of time in her garden growing vegetables and flowers. She also has an awesome Springer Spaniel named Duke!