Sudden acute low back pain especially when it occurs for a trivial reason and without any warning can be a very alarming and painful condition. Often there seems to be no relationship between a simple movement and the amount of pain that follows. There is an almost vindictive character to the pain which is referred to in German as the Hexenschuss or witch’s bolt. The pain can be very disabling and excruciating at times. It can affect anyone at any time although a previous history of back pain can increase the chances of this happening. As pain is a symptom rather than a medical condition there is a very variable prognosis for acute low back pain although fortunately in most cases the pain is out of all proportion to the seriousness of the condition and it can resolve surprisingly quickly.
The best description of acute low back pain I have come across is to be found in a letter by the fourteenth century philosopher Erasmus, even after over four hundred years one can still feel his pain and distress at what happened.. 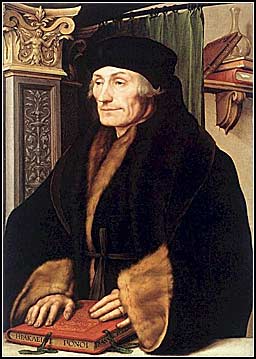 I stayed for two days with the Abbot; we spent the time with a good deal of enjoyment. He let me go with proofs of affection and promised many things in a most friendly way. So everything was well but Beware! Suddenly fortune doomed me and showed me that no one should rely on things going well.
I had only just left an inn which is halfway between Ghent and Rousselear when my horse seeing some baskets on the ground shied. Then when I bent forwards slightly to say something to my servant the terrified horse leapt in another direction and so twisted the bottom of my spine that I was forced to testify to the intolerable pain with loud repeated screams. I tried to get down from the horse, not possible; the servant lifted me off holding me in his hands. The pain raged beyond the power of words to describe. Its fullest intensity was when I tried to bend. It was less painful when standing but I was not able to straighten by myself when once bent over.

There I was in the middle of the fields with nowhere to stay but in the most basic and freezing accommodation and at least six miles from Ghent. I realised that the journey was too far to be completed by even a healthy man on foot.

Think what went through my mind! I vowed to Saint Paul to complete my commentaries on his epistle to the Romans if it happened that I escaped this danger. After a while in despair I was forced to try to get up on my horse. I did get up (beyond belief) better than I had hoped. I was able to endure a gentle walk, I ordered my servant to go a little faster I endured this as well although not without agony.

I arrived at Ghent, got down from my horse and went up into the bedroom. There the pain was overwhelming and most extreme at rest. I could not stand unless supported on both sides and well supported at that. If I relaxed even a little the intolerable pain returned. Nor was I able to sit. Lying down I could not move even a small amount. I called for a doctor and for a chemist. I was so distressed in all these ways that I could think of nothing except death.

In the morning I tried to move a little on the bed, I managed it, I stood, I moved and sat without help. I gave thanks to God and Saint Paul. The feeling of pain remained, most acute when I twisted and so I stayed for a few days at Ghent my friends keeping me there assisted by the pain from which I am not yet free. This was no common pain whatever it was. Now I shall go to Antwerp if my illness allows it and wherever I am I will inform you of my health.